The Psychology of Money

My highlights of The Psychology of Money, by Morgan Housel 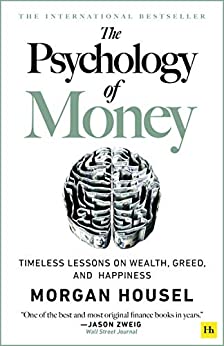 The Psychology of Money, by Morgan Housel, is probably the first book I would read if I was starting over and trying to understand how to build wealth. It deals more with the mindsets conducive to acquiring and keeping money than personal finance tactics.

Even for somebody like me, with more than 30 years saving and investing money, the book contained several insights that I hadn’t figured out yet, and gave me good pointers on how to fine-tune my investing strategies going forward.

I have included the most relevant quotes from the book below, and highlighted those that most resonated with me.

“The premise of this book is that doing well with money has a little to do with how smart you are and a lot to do with how you behave. And behavior is hard to teach, even to really smart people.”

“Financial success is not a hard science. It’s a soft skill, where how you behave is more important than what you know.”

“Two topics impact everyone, whether you are interested in them or not: health and money.”

“Your personal experiences with money make up maybe 0.00000001% of what’s happened in the world, but maybe 80% of how you think the world works.“

“No amount of studying or open-mindedness can genuinely recreate the power of fear and uncertainty.”

“Some lessons have to be experienced before they can be understood.”

“Every decision people make with money is justified by taking the information they have at the moment and plugging it into their unique mental model of how the world works.”

“The accidental impact of actions outside of your control can be more consequential than the ones you consciously take.”

“Someone else’s failure is usually attributed to bad decisions, while your own failures are usually chalked up to the dark side of risk.”

“The difficulty in identifying what is luck, what is skill, and what is risk is one of the biggest problems we face when trying to learn about the best way to manage money.”

“Not all success is due to hard work, and not all poverty is due to laziness.”

“Focus less on specific individuals and case studies and more on broad patterns.”

“Studying a specific person can be dangerous because we tend to study extreme examples.”

“The more extreme the outcome, the less likely you can apply its lessons to your own life, because the more likely the outcome was influenced by extreme ends of luck or risk.“

“The trick when dealing with failure is arranging your financial life in a way that a bad investment here and a missed financial goal there won’t wipe you out so you can keep playing until the odds fall in your favor.”

“The hardest financial skill is getting the goalpost to stop moving.“

“Enough” is realizing that the opposite—an insatiable appetite for more—will push you to the point of regret.”

“There are many things never worth risking, no matter the potential gain.”

“Linear thinking is so much more intuitive than exponential thinking.”

“Earning pretty good returns that you can stick with and which can be repeated for the longest period of time.”

“There’s only one way to stay wealthy: some combination of frugality and paranoia.”

“Getting money and keeping money are two different skills.”

“Compounding only works if you can give an asset years and years to grow.”

“A plan is only useful if it can survive reality. And a future filled with unknowns is everyone’s reality.”

“Room for error—often called margin of safety—is one of the most underappreciated forces in finance.“

“Sensible optimism is a belief that the odds are in your favor, and over time things will balance out to a good outcome even if what happens in between is filled with misery.”

“The great art dealers operated like index funds. They bought everything they could. And they bought it in portfolios, not individual pieces they happened to like. Then they sat and waited for a few winners to emerge.“

“An investor can be wrong half the time and still make a fortune.”

“Anything that is huge, profitable, famous, or influential is the result of a tail event—an outlying one-in-thousands or millions event.”

“A few companies account for most of the market’s return [Note:Buy diversified index funds]“

“A good definition of an investing genius is the man or woman who can do the average thing when all those around them are going crazy.”

“The highest form of wealth is the ability to wake up every morning and say, “I can do whatever I want today.”

“The ability to do what you want, when you want, with who you want, for as long as you want, is priceless. It is the highest dividend money pays”.

“we’ve used our greater wealth to buy bigger and better stuff. But we’ve simultaneously given up more control over our time.”

“If respect and admiration are your goal, be careful how you seek it. Humility, kindness, and empathy will bring you more respect than horsepower ever will.”

“Wealth is what you don’t see.”

“Wealth is financial assets that haven’t yet been converted into the stuff you see.”

“It is so ingrained in us that to have money is to spend money that we don’t get to see the restraint it takes to actually be wealthy.”